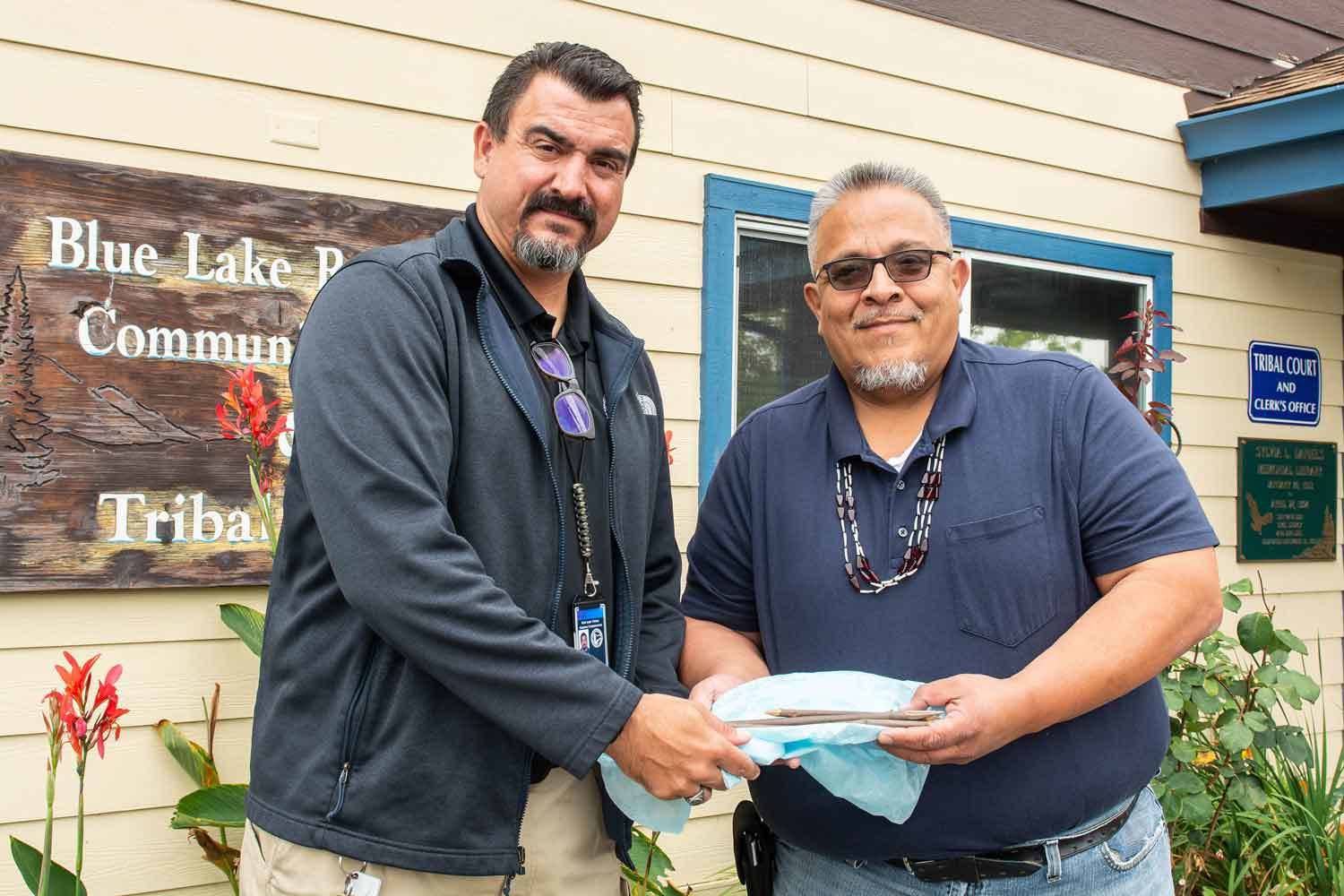 In a private ceremony at the tribal government office this morning, tribal artifacts taken from the Old Arrow Tree near Korbel over 105 years ago were returned to the Blue Lake Rancheria, presented by Ted Hernandez, Chairman of the Wiyot Tribe.

The artifacts were removed from the Old Arrow Tree by self-taught ethnographer L.L. Loud in 1913. Chairman Hernandez worked with several agencies and stakeholders to secure and return three prayer sticks comprised of two sharpened Hazelwood sticks and one sharpened forked sprig of Redwood.

“We are overwhelmed with gratitude to Chairman Hernandez for his untiring work to locate these objects and bring them back to us,” said Arla Ramsey, Vice Chair of the Blue Lake Rancheria. Hernandez is widely acclaimed for his efforts to identify, obtain, and return artifacts to local tribes.

These prayer sticks have a powerful message, undiminished all these years later, about how people can peacefully co-exist by remembering the past and reaffirming their will to do better.Arla Ramsey, Vice Chairperson, Blue Lake Rancheria Tribe

The tree itself, and the arrows and prayer sticks imbedded in it and placed nearby, had several meanings and uses prior to Euro-American contact. The California Historical Landmark description states the Arrow Tree “site is said to have been used by Indians to commemorate an important peace treaty. In memory of the treaty, each tribe, upon passing, was supposed to have shot an arrow into the bark.”

In the Federal Register notice that described the repatriation of these artifacts, the Arrow Tree and these prayer sticks served, “to mark the boundary between the Wiyot and Chilula territories” (Federal Register / Vol. 81, No. 191 / Monday, October 3, 2016 / Notices).

The prayer sticks and their position in and near the Arrow Tree have additional cultural and traditional meanings for local tribes, including bestowing the person offering the sticks with safe travel as they journeyed across ancient paths between Redwood Creek, the Mad River, and Pacific Coast.

“We are considering how best to honor these cultural resources and to use them for educational purposes,” Ramsey said. “These prayer sticks have a powerful message, undiminished all these years later, about how people can peacefully co-exist by remembering the past and reaffirming their will to do better.”