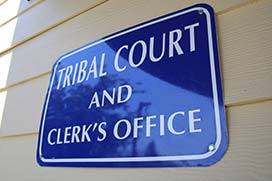 As in state and federal court systems, BLR Tribal Court judges objectively consider and rule based on all applicable laws. The Court has the authority and expertise to interpret tribal ordinances, interface with local, state and federal jurisdictions and adjudicate legal matters including: civil, family, intra-tribal and inter-tribal issues (the Court is qualified to adjudicate laws of any federally recognized Native American tribe).

Judges are hired and appointed by the BLR Tribal Council, but the Court is mandated to operate impartially based on applicable law, and remain independent of any tribal interest.

Sets of Tribal Laws, called Ordinances, are drafted and approved by the Tribal Council.

Clerk of The Court:

Ordinance No. 94-01 - License and regulate the conduct of all bingo and gaming activities146.1 KB

Ordinance No. 17-02 - Adopting a Tribal Sales Tax on Food Purchased for On-Reservation2.7 MB17-03 - Amendment to Ordinance 06-02, Authorizing Business Entities Wholly Owned by the Tribe to Convert to Another Form of Business Entity, Including a Division of the Blue Lake Rancheria Economic Development Corporation, a Federally Chartered Corporation of the Tribe1.5 MBOrdinance No. 17-04 - Designating the Tribal Officials, Officers, and Employees Protected from Unconsented Suit by Official and Tribal Sovereign Immunity3.6 MB